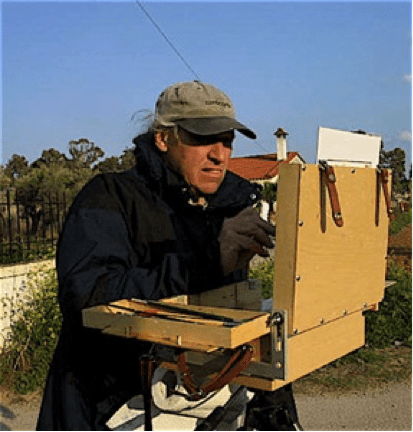 I paint ideas….things that come to me during the course of my life. Be it an Irish castle or a Kiowa teepee, I attempt to portray the humanity behind the image, not the object itself. This can be a challenge, a noble one worth pursuing.

Many of my paintings have the look and feel of the American West………that is because the West is the place where I was born and raised. I know the rattle of cottonwoods on a cold fall morning, the hue of dusk’s long light on a buffalo grass prairie; I have drunk the cold drip of a blue shale spring. These things have nurtured me from my birth, and coyotes, God’s Dogs, have howled their essence into my soul.

Wherever I travel I paint, and wherever I paint I gather stories, histories, myths, and legends; they allow me to “see” with a larger eye. It is my hope this translates to my paintings and makes for a meaningful experience for the viewer.

The Story Behind “The Controlled Turn-A-Round”:

Bill Linderman, a Red Lodge , Montana World champion rodeo man, was the first president of the RCA, the Rodeo Cowboys Association. After a RCA meeting in Oklahoma City in 1965, Bill caught a plane to return to Red Lodge. The plane crashed at takeoff. Bill survived the crash, but went back into the plane to bring out victims. He was killed in a fiery explosion after several successful rescue trips.

Mathew Woodrow was a retired Smith Mine foreman near Bear Claw, Montana. In 1943 he heard the mine whistle’s declaring an accident. Though retired he went to the mine to offer help based on his years of experience working the mine. A methane explosion had decimated the #3 mine. With no gas masks available Mathew rushed into the mine four times to bring out injured miners. On the fifth attempt Mathew became trapped in a pocket of bad air and died.

The Story Behind “Going Home”:

On March 26, 1931, the Pleasant Hill school bus was stranded in a snowdrift during a white out blizzard on the Plains of eastern Colorado. As temperatures dropped the driver, Carl Miller, decided to leave the safety of the bus and attempt to find help. Completely lost and disoriented, Carl followed a fence line for miles before freezing to death in the sub zero weather. Five children perished on the bus, including my father’s youngest brother Arlo, and Mr. Miller’s daughter Mary Louise. Carl Miller gave his life in an attempt to save these children’s lives, his frozen hands tattered from following the barb wire fence.

The most deadly mining disaster in US history occurred on June 8, 1917 at the Speculator Mine on Granite Mountain in Butte, Montana. One hundred sixty eight miners perished in this deadly fire and explosion. Conn O’Neill, an Irish born foreman of the adjacent Badger Mine, used his knowledge of the shafts and stopes to rescue miners by underground routes. Twenty times Conn went into the inferno from the Badger carrying twenty men out one at time, saving their lives. On the twenty first trip, Conn was trapped in bad air and died, help unable to reach him in time.

There are many examples of heroic sacrifice in our history, I have simply related four instances of which I have some sort of personal connection. This painting is in honor of all courageous individuals who give their lives to save others. May they each and every one find comfort and peace in an eternal home.